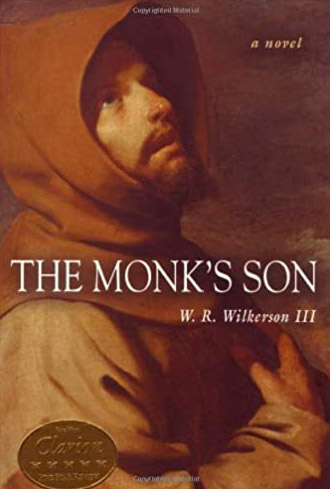 From the ashes of a shattered life – an unlikely redemption

Southwest England, 1940. Pausing to gather medicinal herbs in a field belonging to his abbey, the Order of St. Martin, an apothecary monk named Dominic hears the cries of a newborn. Considering this a second chance given to him by God, Dominic successfully petitions his abbot to let him raise the boy within the confines of the monastery. Steven grows into young adulthood beloved by everyone, for even though the monks eschew the concerns of the outside world, they each find they have a place in their hearts for a child’s love.

In The Monk’s Son, his quiet yet compelling novel, W. R. Wilkerson III explores the interconnected lives of Steven, the ward of the abbey who has never known any other life, and Michael, the talented artist with a hatred for authority who descends into his own personal hell, from which only Steven can rescue him. Through the lens of this unlikely friendship, the book explores love, revenge, art, religion and spirit; the true meaning of family; and the tensions between the sacred and the profane, the worldly and the isolated.

Michael—a brash and troubled youth—first comes to the monastery as a wartime orphan at the age of sixteen. That’s when Steven, then a thoughtful and pious young man of sixteen, meets this young artist, who will test his faith and torment his soul. A midnight encounter between the two results in Steven’s attempted suicide, but Steven recovers under the skilled eye of his adoptive father, Brother Dominic.

Michael leaves the monastery to study art at London’s prestigious Royal Academy. But after a disastrous romance, he loses his ambition and abandons his studies. His life takes darker and darker turns as he deteriorates into drug addiction and a life of crime on the streets.

Meanwhile, Steven derives strength and meaning from the monastic life. Nurtured by the spiritual and intellectual passion of a community built on faith, he takes his vows and follows in Dominic’s footsteps to become a doctor.

When at last Michael’s world spirals out of control, he returns to the monastery in despair. When the man of faith and the criminal meet again, Steven weaves a complex web of spiritual, emotional, and physical supports that offer Michael his only hope—but at a deadly price.

The Monk’s Son explores the classic struggle of good versus evil in an intricate story of a controversial friendship. A heady mix of religion and desire, The Monk’s Son is a beautiful and triumphant coming-of-age story whose hypnotic power and heart-wrenching conclusion will haunt readers long after they turn the final page.

Anyone who has ever questioned, sought faith, found respite in nature, or struggled back from the brink will find this book intriguing and entertaining. This emotionally powerful novel proves W. R. Wilkerson as a perceptive, talented writer.

Praise for The Monk’s Son:

“Five stars. W. R. Wilkerson’s emotional novel, The Monk’s Son, incorporates several subjects that not so many years ago might have precluded it from publication to a mass audience. The sensitive, factual treatment of homosexuality, drugs and prostitution underlines how an accomplished writer can turn even the most charged of subjects into a compelling, inclusive and readable story…”
Reviewed by M. Wayne Cunningham

“I absolutely loved this book! I saw it in a small wire display while waiting in line at a local cafe and I picked it up because I was intrigued by the title and the stunning cover. There were a few people ahead of me, so I started reading the first few pages just to keep myself occupied while waiting for my turn to place my order. I was immediately sucked in by the beautiful descriptions, the plot, and the interesting characters, and I ended up purchasing the book along with my coffee and muffin! This book did not let me down, and I enjoyed it immensely…”
Reviewed by Jennifer Stein