How Would You Vote

How Would You Vote If You Were Allowed To?

Experience the Power of Direct Democracy and Make Your Voice Heard 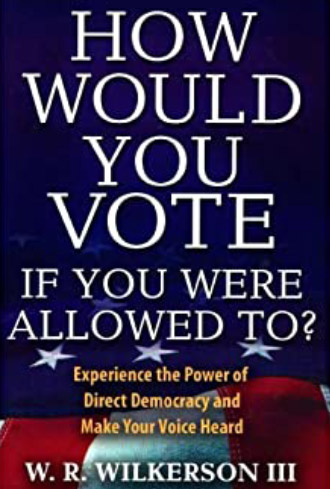 The Power of Direct Democracy

The U.S. electoral system is broken beyond repair—let’s throw it out and start over!

Many people in the United States vote with paperless electronic machines that cannot be trusted to count votes accurately or be free of tampering.
Unlike most of the civilized world, not only do legitimate third parties have no real voice, but voting for them is seen as “throwing your vote away on a spoiler!”
Because of the way campaigns are funded, elected officials are captives of the corporate special interests who pay for their campaigns.
The United States has some of the lowest election participation rates in the world—people think their votes don’t matter, so they don’t bother voting.
In close elections, nearly half the voters end up with elected officials who don’t represent their views.
But your vote does matter! Did you know that dozens of “squeaker” elections have been decided by a handful of votes? In some cases, a single vote made the difference between victory and defeat! W. R. Wilkerson III, author of How Would You Vote If You Were Allowed To? offers a completely new blueprint for elections that count and a government process that matters to ordinary people. “No court should need to interfere in an election, and people need to know that their votes count too,” he says.

Learn more about this recipe for a democracy that means something—for a country of empowered citizens ready to face the challenges of creating a government that is truly what Abraham Lincoln said is our right: a government “Of the People, By the People, and For the People.”

“That whenever any Form of Government becomes destructive of these ends, it is the Right of the People to alter or to abolish it, and to institute new Government, laying its foundation on such principles and organizing its powers in such form, as to them shall seem most likely to effect their Safety and Happiness.”
Thomas Jefferson, The Declaration of Independence

Praise for How Would You Vote If You Were Allowed To?

“Wilkerson is a gem of a writer — lucid and fair…Describes the way that democracy should work – and could work if we gave it a chance…It’s a great book and a great cause.”
Robert Lacey, historian and bestselling author

“You cite many interesting examples in your attempt to prove that every vote counts.”
U.S. Senator, Jim Bunning Kentucky

“Our current electoral system does not make the individual voters feel that their voice is heard. This well-written and reader-friendly offers an alternative method of voting that ensures the will of the majority is carried out. This book shows young people that every votes does matter…so they are more likely to participate.”
Mahtash Esfandiari, Ph.D, professor UCLA, social science researcher, educational consultant